The Wreaths Across America is an annual tradition that began in 1990, when a group of Boy Scouts and Girl Scouts from Troop 77 placed blue plastic sprigs on veterans’ graves during the Christmas season. 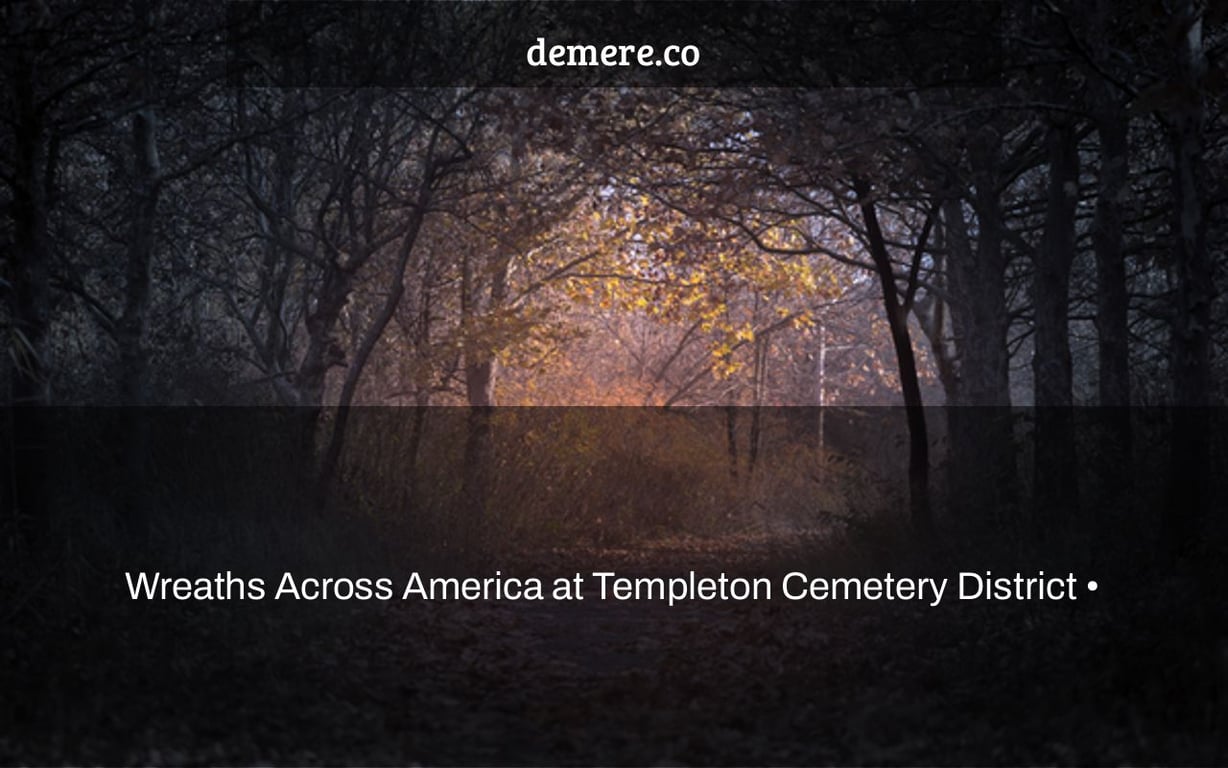 Wreaths were put on the graves of 350 veterans.

This was the chapter’s third year of partnering with the legion to raise donations for wreath purchases. At 10:00 a.m. on Saturday, Dec. 18, volunteers from the NSDAR and the Templeton Legion gathered around the flag pole in the Templeton Cemetery District to participate in the annual Wreaths Across America (WAA) Day.

The service was launched by Templeton American Legion Post #220’s color guard, and El Paso de Robles Chapter president Lisa Wood led everyone in the Pledge of Allegiance. A prayer was said, and a bugler played taps, the military funeral march that we are all familiar with.

“Remember, we are not here today to “decorate graves,” Wood said to the volunteers. We’ve gathered to commemorate their lives rather than their deaths. Each wreath is a token of gratitude from an appreciative America.”

Wreath-laying rituals are coordinated by WAA in more than 2,500 sites throughout the United States, at sea, and overseas.

WAA is dedicated to instilling in future generations the value of their liberties and the necessity of remembering those who have given so much to defend them. Learning tools, interactive media projects, and chances for young groups to engage in events are all available via the organization. They also aim to link “the Greatest Generation” with the “Generation of Hope,” passing on inspiring tales from WWII veterans to the next generation of leaders.

Many local sponsors contributed to the buying of Christmas wreaths. Each one was put at the Templeton Cemetery’s 350 designated and unmarked military graves. Volunteers read the veteran’s name, noted the war they fought in, and regiment if it was available before setting the wreath.

Wreaths were placed on the graves of veterans from World War I, World War II, the Korean War, and other conflicts. Some returned home after their fight, but others did not. As predicted, many of the veterans were males. However, wreaths were placed on the graves of military women such as Clair Smith, a WWII Private First Class Infantry, and Ethel Caldwell, a WWI Army Second Lieutenant.

The Blueprinter in Paso Robles, A-Plus Fire Protection, Inc. in Paso Robles, Shiloh Bookkeeping Tax Company in Shandon, as well as gifts from families around the neighborhood, all contributed to the wreaths.

“Our Chapter is extremely happy to be a part of Wreath Across America in remembering these Men and Women who valiantly served our Country and lost their life for some,” Wood added.

Visit wreathsacrossamerica.org for more information about Wreaths Across America.

The National Society Daughters of the American Revolution is a nonpartisan, nonprofit women’s service organization that has grown to over one million members since its inception in 1890. Any woman 18 years or older who can establish lineal heritage from a patriot of the American Revolution, regardless of color, religion, or cultural origin, is eligible for membership. DAR members are dedicated to supporting historic preservation, education, and patriotism, which is a timeless purpose. Visit elpasoderobles.californiadar.org for additional details.

How much does a wreath across America cost?

What is the date for Wreaths Across America 2020?

How do I participate in a wreath across America?

A: The wreath across America is a yearly event that takes place on the first Sunday in December. So you will want to take your bike ride then!

Can a virus cause a laptop to overheat? 7 Solutions to your ‘antivirus overheat’ problem